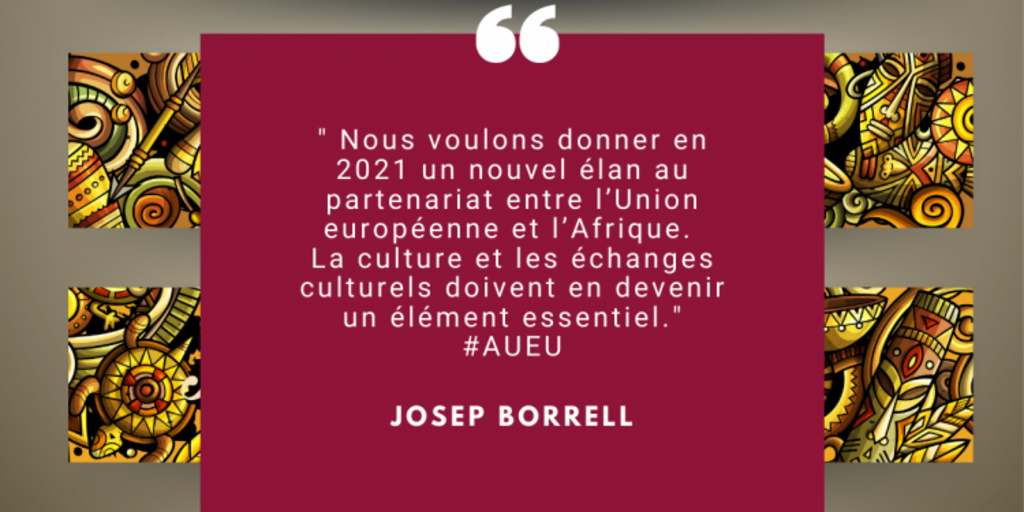 Culture at the heart of EU – African partnership

In his blog post from 03 January 2021, EU High Representative Josep Borrell talks about the role culture plays and should further play in the partnership between the European Union and Africa – apart from economic and political issues.

Anne Noe on behalf of the Service Provider

For the start of the new year 2021, Josep Borrell – EU High Representative – outlines his ideas regarding the role culture and cultural exchanges should play in the EU - African partnership. He states that “culture is so present in our lives that it often becomes invisible […] it is also at the heart of our identity […] culture is, in short, an important economic resource.” (Josep Borrell - Placing culture at the heart of our dialogue with Africa)

The latter refers to the fact that sectors such as design, cinema, and the creative industries are important sources of employment and income and therefore should be generally more supported. Borrell further specifies that this is now even more necessary than ever due to the COVID-19 crisis, both in Africa and in Europe.

Moreover, the High Representative highlights the assets culture can bring to foreign policy challenges, “whether they are health crises, conflicts, or threats related to climate change” (Borrell) as it can find solutions where traditional policy tools do not. In this regard, he lists several examples such as Niger and Burkina Faso, where the EU supports different projects which involve young people “because strengthening education and respect for other cultures is an essential part of the response to terrorism.” (Borrell)

After stressing further EU-supported initiatives such as the Pan-African Film and Television Festival of Ouagadougou (Fespaco), one of the biggest events presenting African cinema on the world stage, or the Youth Hub, which was set up by the African Union and the European Union to allow youth from both continents to meet and strengthen partnerships, Josep Borrell addresses a topic which is of special interest for ASAF, that is to say exchange and mobility programmes:

“Over 26 000 exchanges have taken place between Europe and Africa since 2014 through the Erasmus+ programme. We want to go further and to allow at least 105 000 African students to benefit from a mobility programme by 2027.” (Josep Borrell - Placing culture at the heart of our dialogue with Africa)

Finally, the theme chosen by the African Union for the year 2021 “Arts, Culture and Heritage: Levers for Building the Africa We Want” also emphasises the crucial role culture plays and should play in the partnership between Europe and Africa.