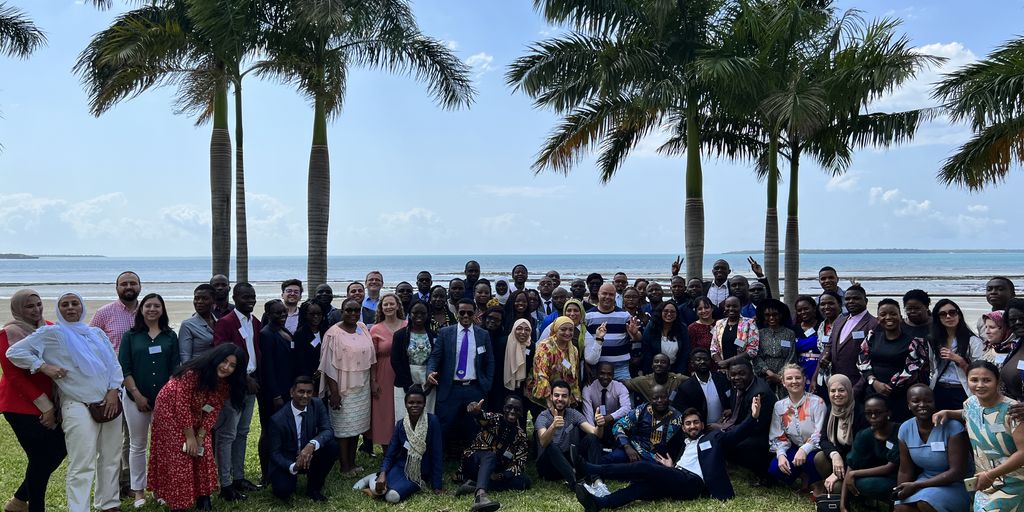 The 2nd ASAF Annual General Forum took place during the weekend of June 17 - 19 2022. The forum was organised as a hybrid event to enable both onsite participation in Dar-El-Salaam, Tanzania and online by the expectant ASAF membership.

Day one of the ASAF AGF provided members with the first chance to meet physically after interruption by the COVID-19 pandemic. The high expectations and energy of the audience was evident in their lively participation and contribution to the various sessions. The first day of the event commenced with ASAF President-Felix Kwabena Donkor welcoming the participants to the event whilst Baha Saidi (Interim Board Member for Communication) and the moderation team ushered participants into the overall programme.

Hélène Banegas (Project Adviser EACEA), then gave a presentation that touched on ‘The support of international Alumni networks by the European Union, and ASAF in particular’ where she addressed the critical role of the EACEA in promoting opportunities for the ERASMUS+ family with a focus on ASAF.

This paved the way for Anne-Eunice (ASAF Board Member) to introduce the Mission and Vision of ASAF to the members, whilst Jackson Lontchi (ASAF Board Member for survey and research) explained the voting tool to the audience. After a period of voting, which saw the approval of the ASAF vision and mission statements; Baha Saidi presided over the announcement of the final results and official launch of ASAF’s vision and mission statement. Members then had a chance to take a pause as they went on a coffee break coupled with a group photo session mediated by Imane Benrabiaa (Core Group Member). Even as the photo session helped capture some of the core moments of the AGF, there was also the desire to capture some of the major highlights of ASAF.

This led to the session on ASAF taking stock which spelt out what had been achieved by the interim board. In this regard Felix Donkor gave an overview of some of the key achievements specifically by the Interim Board (ENG), whilst Lina Mkoji (ASAF Vice-President) similarly dealt with that of the Co-ambassador (ENG) with Nabil Laakoun in the light of ASAF’s task forces (FR). The immense generated led to a lively Q&A session.

Another highlight of the AGF was the review of the ASAF Statutes and Internal regulation which was jointly moderated by Cosmas Kombat (ASAF Bard Member for Internal Affairs) and Marieme Wade (Task Force Member). Participants were then afforded an opportunity to refuel and energize in the lunch break.

With the audience now energized, the interim board and moderation team led the session on ASAFs next steps which revolved around:

This fed into an introduction of ASAF’s Working Groups and formation of groups by Felix Donkor and the moderation team. This formed the premise for the groups to work in parallel under the theme:Unleashing the Potential of ASAF to be the Leader in Africa and Global South. This included the various task forces and Co-Ambassadors meeting to develop their individual plans and strategies for the coming years viz:

After a report from the groups which presented the highlights of the discussions, Day 1 of the ASAF AGF ended after a final recap of the day’s events and giving of announcements.

During the recess however, Dr. Martin Unger (IHS), Jackson Lontchi together with survey task force members met concerning the ASAF Survey on impact on mobility providing a report of ASAF’s pilot survey.

The final highlight of the day was the “Gala” Dinner which had the Head of Cooperation of the EU Delegation to Tanzania - Cedric MEREL, gracing the occassion with his presence.After welcome words by Cosmas Kombat and Felix Donkor, Mr Cedric gave a brief speech to unsher the audience into the programme of the evening. This was then followed with the observance of a minute of silence in honour of an ASAF member who was volunteering at the African Union but passed on ealier in the year.

The dinner was decorated with representative cuisine and cultural artefacts of members‘ countries that painted a picture of the rich cultural heritage of Africa. Some of the items that members put on display included, plantain chips, cookies,

traditional/cultural attires amongst others. The audience was treated to very lively music by musical troupe whilst African Gospel singer Anne-Eunice Capel animated the event with her danceable tunes.

The day 2 of AGF started with an introduction of the agenda. This followed with the ASAF survey workshop by HIS Institute for advanced studies. This was started undertaken in parallel with the online and onsite Agora sessions that discussed, developed different topics of interest and helped sharpen ASAF’s thematic profile. Ten onsite sessions and one online session were successfully conducted and main conclusions from the groups were reported to the general audience. This was capped with a cultural dance session which served a great energizer after the coffee break.

With the audience recharged, a panel discussion on the theme “Harnessing the demographic dividend: Grassroots Impact of Erasmus+ mobility programs” was moderated by ASAF president – Dr. Felix K. Donkor and Ms. Elizabeth Achola Mang'eni, - Senior Officer with the Ministry of Industrialization, Trade and Enterprise Development in Kenya. Students’ organizations including - EMA, ESN and WBAA were among the online guest speakers who talked about the different organization’s’ impact on the society and how empowering their members to implement projects can make a great impact on the local communities.

After the lunch break, the public conference “ASAFs role as a broker towards the Africa we want” commenced with an introduction by Ann-Christin Berger who presented the external guests and their positions viz: Maryam Makobwe, Lorraine Kaknyu and Vivian Ngowi.- EU delegation in Tanzania.
An online session “Être membre d’ASAF en 2022: Motivations, opportunités et challenges” was presented by Ms. Hélène Banegas, the EACEA project adviser, who set an online questionnaire for the online participants about their origin countries and their motivations to join ASAF., She responded to the participants’ questions/inquiries and discussed the opportunists and challenges. Breakout sessions discussion ‘s reports from the rapporteurs were prepared in 2 min presentations highlighting the main conclusions for the general audience.

Ms. Fiorella Perotto, EU Senior Expert closed the curtains on the 2nd day of ASAF AGF ended with a ‘closing word’ captured in ‘a video message’ addressed to all ASAF members and presented by her Excellency Jutta Urpilainen – EU Commissioner for International Partnership (INTPA). Another ‘closing word’ was presented by Mr. Malouono Orphon, ASAF member, followed by a ‘note of thanks’ by Ann-Christin Berger addressed to RAMADA hotel management and team members, all ASAF members who brought their traditional food and souvenirs that highlighted the diversity of ASAF members.

A cocktail drink and some foods were served “Apéro riche” until 20:30hrs with a cultural event in Dar Es Salam planned to take place on the next day 19th June, 2022.

edited by the Service Provider